The Soviet Union and where to find it: social discourses about Soviet symbols in Lithuania

by Eglė Kesylytė-Alliks,  PhD candidate at the Faculty of Humanities, University of Oslo.

On the 11 March 2017 Lithuania will be counting 27 years since the declaration of its independence from the Soviet Union. This period produced a generation of citizens who were socialized within the newly re-established state. How then does this generation relate to the Soviet Union? Is it still at the ‘centre’ or is it already relocated to the ‘periphery’ of their political imagination?

In line with studies exploring symbolic nation-building, I argue that political symbols play a significant role in the development and expression of national awareness.1 I also agree with the claim of Rudolf de Cillia, Martin Reisigl and Ruth Wodak that national identities are discursively constructed.2 Building on these ideas, I suggest that the analysis of social discourses surrounding them offers an intriguing perspective for answering this question.

In order to gather data on this topic, I conducted three focus group discussions in Lithuania in March 2015. Participants of the discussions have spent their formative years in already independent Lithuania and identified themselves with the three largest ethnic groups in Lithuania – Lithuanians, Poles and Russians. 3

Here, I would like to discuss some of my findings regarding perceptions of Soviet political symbols (flags, badges, military medals, etc.) and evaluations of the current state legal regulations regarding their use within focus groups. In Lithuania, Article 188(18) of the Code of Administrative Offences stipulates a fine for distributing or demonstrating Soviet or Nazi symbolism (and the confiscation of such items), except in connection with ‘museum activities, public awareness of the historical and current events, totalitarian regimes, education, science, art, collectibles, antiques or flea- market purposes’ or the person who uses them also ‘uses the existing official state symbols’, or the person is the ‘Second World War participant, wearing his uniform’. Focus group participants were not provided with any prior information about specific details of these legal regulations, as I wanted to see what opinions and knowledge they already had. 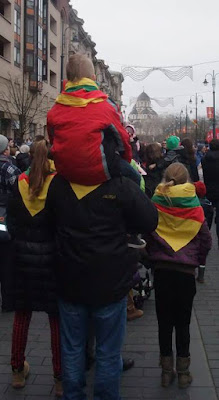 All three groups felt that a certain display of Soviet and Nazi symbolism can cause administrative and criminal liabilities in Lithuania, though none of the participants seemed familiar with the particulars of these regulations. In all three groups, these purported regulations of the state were not challenged. However, they were viewed with slight sarcasm or even deemed unnecessary in connection with Soviet symbolism (Nazi symbolism attracted little attention) when the Soviet Union was perceived in a ‘passive’ mode – as a relic of the past and its symbols as touristic commodities sold in flea markets. This temporal distance was created by connecting Soviet period with ‘old age’ (for example, the use of gendered and ageist idiom of ‘grandmothers’ or nostalgia for the Soviet Union described as an expression of senile dementia) and locative deixes like flea-markets. The perception of Soviet symbols as commodities used in commerce as souvenirs in the tourist industry constructs an image of the Soviet Union as a state that had lost its political meaning and acquired a commercial one.

However, a contrary perspective towards the Soviet Union and its symbols appeared in two contexts. First, when Lithuania was discussed as a victim of the Soviet Union, Soviet symbols were depicted as still capable of inflicting ethnic as well as political divisions and unrest within Lithuanian society (a view mostly expressed in the Polish group, to some extent in the Russian group). The state (referred to either as politicians or political institutions) was perceived as sustaining Lithuania as a ‘calm’ and ‘independent’ country through its regulations on Soviet symbols. The state prohibition of using Soviet symbolism is thus approved. Second, in the discourses in the Lithuanian focus group, the main factor that appeared to disentangle Soviet Union from its representation as a relic of the past was the Ukraine crisis and perceived threat that Russia posed to Lithuania. In this context, the political meanings of the Soviet Union became ‘activated’.

The fluctuating image of the Soviet Union and its location in-between past and present, centre and periphery within the statements of the focus group discussants exemplifies the existence of multiple discourses on the USSR in Lithuania. It highlights their contradictions and similarities. Finally, this diversity of discourses demonstrates the contingent nature of their assumptions as well as their dependency on power dynamics.