EITI Suspension of Kyrgyzstan and Tajikistan Tests Its Global Leverage

by Saipira Furstenberg , PhD Candidate at the Research Centre for East European Studies, University of Bremen

With the suspension of Kyrgyzstan and Tajikistan, along with Azerbaijan’s withdrawal, the Extractive Industries Transparency Initiative (EITI) finds itself at a critical juncture.

In March, EITI rapped Azerbaijan over the government’s failure to fully implement “corrective actions related to civil society space,” and insisted that mandated changes be fully implemented by this July. Meanwhile, the organization sanctioned Kyrgyzstan and Tajikistan for making “inadequate progress” in the area of civil society reform, and established “corrective” actions for the two Central Asian states to implement in order for them to be reinstated as members in good standing.

In response, Azerbaijan withdrew from EITI. Kyrgyzstan and Tajikistan now have until early September 2018 to improve compliance with EITI standards, or face additional punishments. Their willingness to comply will serve as a litmus test of the organization’s growing influence.

In many ways, this influence is already impressive. The 14-year-old initiative brings diverse coalition of civil society organizations, donor agencies, energy companies, and more than four dozen governments—most of them resource-rich autocracies. The initiative’s premise is that forcing participating governments and extractive companies to reveal what they earn from oil, gas, and precious metals will improve conditions for local populations and catalyze growth.

Yet EITI membership is voluntary and the powers of enforcement of its decisions are accordingly limited—a shortfall that affects its stance on civil society in particular. EITI considers civil society groups a crucial component for the effective monitoring of state revenue generated by extractive industries. It thus aims to ensure that watchdogs retain the ability to hold officials and corporations accountable for their actions, and to encourage revenue transparency.

Many governments of EITI’s resource-rich member countries, however, do not especially like scrutiny, and take steps designed to stifle and marginalize civic society groups. Because of this, EITI requires them to work on enabling this dialogue.

Although the EITI regularly grades members’ progress on this score—along with other benchmarks for data quality and disclosure—its use of the suspension tool has so far been limited. (In the few cases it was applied, it was used against states that were embroiled in conflict or missed reporting deadlines).

The fact that both Azerbaijan and Kyrgyzstan joined EITI at its pilot phase back in 2004 makes the disciplinary action taken in March all the more significant.

Azerbaijan in particular was once EITI’s model member, becoming in 2009 the first country to achieve full compliance. The trend did not last, however, as President Ilham Aliyev’s administration grew more authoritarian and suppressed all forms of opposition. EITI responded by ordering the country to improve and, when it failed, Azerbaijan found its EITI status repeatedly downgraded. At the March meeting, Baku blasted the EITI for overstepping its purview.

Azerbaijan’s withdrawal entails significant risks. Azerbaijan relies on natural gas for much of its revenue, and one pipeline it is currently constructing, the $46-billion Southern Gas Corridor, will determine its access to European markets. Its major partners on this project—BP, the World Bank, and the EBRD—are all EITI members. Thus, Baku’s exit from the group presents them with an awkward choice: honor their commitments to the initiative’s standards or shun principles in pursuit of profit.

For Kyrgyzstan, its suspension is likewise a wakeup call. Although the country has been nominally EITI-compliant since 2009, a 2016 validation process marked the first rigorous evaluation of its compliance with EITI standards. The prospect of expulsion from EITI if its fails to implement reforms could entail a loss of technical assistance Bishkek receives under the special Multi-Donor Trust Fund set up by the World Bank to help countries implement EITI principles.

It may be that recent developments signal a positive shift for EITI’s enforcement capacity. But they also highlight persistent shortcomings. 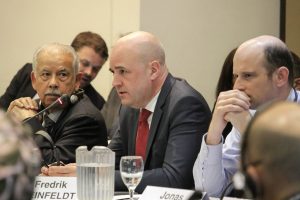 The most glaring issue is the organization’s inability to foster consensus among governments and civil society groups on the requisite level of detail in reporting financial data. Current reporting rules are rather flexible, which allows countries to bypass regulation standards while still appearing EITI-compliant. Governments with weak checks and balances, for instance, often choose to present data in a way that reports project-by-project financials, but still does not share the full revenue picture with the population.

One example is Kyrgyzstan, where mining companies must allocate 2 percent of their royalties to economic development. One-fifth of that amount is paid directly to local communities affected by mining, and the rest goes to the central government. How Bishkek redistributes these revenues to the rest of the country, however, is currently not specified.

Although EITI is making strides in this respect—its board just made disaggregated project-level reporting mandatory for all member states by the end of 2020—much work remains to be done.

This post was originally published  in  Eurasianet and is available here

Great information. Lucky me I recently found your
blog by chance (stumbleupon). I’ve saved as a favorite for later!

Thank you for your comments. We are glad our research is of interest!