The Current State of (non)recognition in the post-Soviet space

Experts have long argued that the efforts of the Russian Federation to secure international recognition of Abkhazia and South Ossetia have largely declined after 2012 and nearly disappeared after the annexation of Crimea in 2014. Such circumstances did not appear to hinder Georgia’s decision makers in their pursuit of non-recognition policy since 2008.  The future of such policy is puzzling. Since recognition withdrawals from Vanuatu (2013) and Tuvalu (2014) have been achieved, new recognitions have not occurred and realistically, Georgia’s essentially responsive policy will never be sufficiently powerful to influence the decisions of Venezuela or Nicaragua.

Rules of the recognition game suggest that the Russian Federation has followed certain pattern in targeting states: UN member states geographically distant from Abkhazia and South Ossetia; economically fragile, small (sometimes micro) and politically unstable states that depend on foreign aid; and its most ardent allies – states that partner with the Russian Federation against the United States – Georgia’s strongest supporter in its non-recognition policy.

It has been long speculated that chequebooks are central to recognition and non-recognition too. However, unlike “caviar diplomacy” or “chequebook” diplomacy, influential players in international relations smartly operate within the framework of development aid, humanitarian aid, or educational exchanges to meet the objective.

In early May, the US president Donald Trump signed the Consolidated Appropriations Act of 2017, also known as the omnibus spending bill, which provides spending permission to a number of federal agencies for the fiscal year. According to the bill, none of the funds appropriated by the Act may be made available for assistance for the central government of a country that has recognized the independence of, or has established diplomatic relations with the Russian occupied Georgian territories of Abkhazia and Tskhinvali Region/South Ossetia.

More importantly, according to the Act, executive directors of international financial institutions will be instructed to vote against any assistance by such institution (including any loan, credit, or guarantee) for any program that violates the sovereignty and territorial integrity of Georgia.

Provisions of the Act represent unprecedented support for Georgia’s territorial integrity and the acknowledgement of Russian occupation of Georgia’s territories. However, the decision of the US government has confirmed a long established behind the scenes rule – playing recognition game on behalf of Georgia using financial incentives.

Reports suggest that the majority of the states in the Pacific survive in continued reliance to the US: nations, such as Tuvalu and Nauru are barely economically viable and incapable of supporting government services without some measure of foreign aid. Interestingly so, the same region has been marked with the high recognition threat by the Georgian diplomats since 2009. Therefore, the US government’s decision has been directed to those states in severe need of foreign aid and which might consider financial incentives offered by the Russian Federation.

While the Georgian Foreign Ministry celebrated support of the new administration in Washington, Tbilisi did not expect “unacceptable and unclear” statements from Herbert Salber, who co-chairs the Geneva International Discussions (GID) on behalf of the European Union. 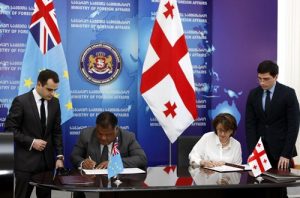 As reported by Civi.ge, during his meeting with Tskhinvali authorities on May 16, Salber, EU South Caucasus Special Representative, congratulated South Ossetia’s new leader Anatoly Bibilov on winning the April 9 presidential polls. Due to such statement, the EU Ambassador to Georgia, Janos Herman was summoned by the MFA in Tbilisi. Later, Herman had to publicly reiterate the official position of the European Union in support of Georgia’s territorial integrity.

Although excluded from the club of sovereign states, the de facto state of Abkhazia claims to have its own recognition game. Often times, such recognitions are limited to the establishment of mutual ties between Abkhazia and certain provinces/towns in Italy. Since, the establishment of such contacts is on the radar of Georgia’s non-recognition policy, the Abkhaz MFA resorts to creative thinking. Just recently, the Abkhaz state news agency Apsnypress released information, claiming that the head of Sukhumi administration had signed a memorandum with a city in Italy. However, the MFA of Abkhazia decided to leave the name of the Italian city undisclosed. As noted by the Deputy Minister Kan Tania, Georgia had previously obstructed deals between Sukhumi and other towns. It did not take long to identify the Mayor of Santa Maria Del Cedro, Ugo Vetere, since Sukhumi did not disclose the name but had published the picture of the visit. Soon found on Facebook, Georgian users reminded Vetere that “Abkhazia and South Ossetia is Georgia” and the Georgian Ambassador to Italy announced the memorandum will be annulled shortly.

After these three events in May 2017, current state of recognition in the post-Soviet area remains intact. However, those events have reconfirmed the existing belief that becoming the member of the club of recognised states is still the highest objective.