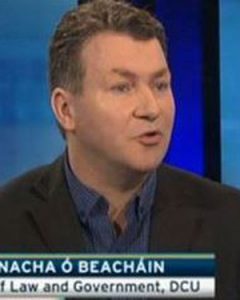 Dr Donnacha Ó Beacháin is Director of Research at the School of Law and Government, Dublin City University (DCU) where he lectures on post-Soviet politics.

During 2011-12 he was awarded a major grant by Ireland’s Department of Foreign Affairs Conflict Resolution Unit to lead a research team to examine the role of the OSCE and EU in the post-Soviet “frozen conflicts”. The project was designed to assist the Irish Government as it chaired the OSCE in 2012 and hosted the EU Presidency in 2013.

In January 2012 Dr Ó Beacháin also received an additional commission from the IRCHSS/Department of Foreign Affairs to conduct field research in Abkhazia and Transnistria and write two reports evaluating electoral politics in these unrecognised states.

Dr Ó Beacháin held a three year (2008-11) Marie Curie Fellowship awarded by the European Commission to conduct research on the colour revolution phenomenon (such as the Ukrainian “Orange Revolution”).