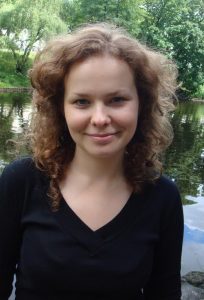 Emilia Pawłusz is conducting her PhD research entitled “In search of an Estonian identity: (formal and informal) mechanisms of identity construction in Estonia. The role of tourism branding, song festivals and popular music” at the School of Law, Governance and Society at Tallinn University. She obtained her MA in sociology and social anthropology in 2011 from the Jagiellonian University of Krakow, Poland. Between 2010 and 2012 she was involved in various research projects about historical memory of communism and Jewish heritage in Kraków. After graduation, in 2011-2012 she worked as an education specialist at the Museum of Contemporary Art in Kraków (MOCAK) where she organised interactive activities aimed at promoting the idea of society open to art, in which everyone, regardless of age or social group, can participate. Between 2012 and 2014 she was a visiting researcher within the Swedish Institute Visby Programme at the Centre for Baltic and East European Studies at Södertörn University, Sweden. Her areas of interest include Baltic choral singing, sociology of music, nation-building in Central-Eastern Europe, and visual anthropology.